It took them the rest of the night and half a day. They had no food. The antelope ate grass and the tips of pine needles. Summer ate nothing. But they shared water from the same bottle and when they slept that night, the antelope woman sang a lullaby in a strange, rich voice. Summer wanted to stay awake, to watch for Grub, but she was exhausted. Instead, she slept and dreamed of horned women dancing in the dark.

She woke feeling strange, and oddly glad to be a girl. It was not a thing that she thought about often, or at all.

They walked until nearly noon. Summer had no idea how to find the others, and perhaps it would have been impossible, but then a valet-bird dropped out of the sky and landed on her shoulder.

She wasn’t sure if it was the same one she had seen in camp, but the prickle of tiny claws filled her with intense relief. The antelope woman was not comfortable company.

“Are you smart again?” she asked the valet-bird. “Is your flock nearby?”

The bird groomed a strand of hair down over her ear and made a small, gruff chirp. Summer didn’t know if that was an answer or not.

Then it took off flying, not in the direction they had been going, but toward the road, which they had been avoiding for fear of encountering Grub again.

“Should we?” asked the antelope woman. “I don’t know that sort of bird. Are you sure they aren’t in the habit of leading travelers to their deaths?”

The valet-bird made an angry chatter from the bushes.

“No, no,” said Summer hastily. “They’re friends. They belon—they work for a friend of mine.”

They followed the bird through the trees for perhaps twenty minutes, and then another bird joined him, then two more. Soon there was a bowler-hatted bird on each of Summer’s shoulders and more chirping from the trees.

One tried to land on the antelope woman’s long horns, but she shook her head and it flew away, disgruntled.

“Nothing personal,” she said. “We have a deal with the chief of the Oxpecker Clan, and it’s more than my life is worth to break it.”

The snubbed bird blew something that sounded remarkably like a raspberry, but did not try to land on her again.

It was less than an hour before there was a gap in the trees and Summer saw the flash of burnt orange feathers.

“Glorious!” She ran forward and flung her arms around the wolf’s neck.

His fur was coarse and hot against her cheek. She buried her face in it and smelled wildness and a single dry sob cracked out of her throat.

There might have been more, but a growl rose in the wolf’s chest, so loud and grating that it rattled her teeth.

The wolf was looking past her, through the trees. Summer followed his gaze to the antelope woman.

“One of them,” growled the wolf. “One of the daughters of chaos.”

“A pleasure to meet you as well,” said the antelope woman, sketching a small, ironic bow.

“She helped me escape,” said Summer, feeling guilty, as if she’d been caught in some kind of wrongdoing.

“For her own reasons,” said Glorious. “And those reasons will be ill ones.”

“Very much so,” said the antelope. “But I never made any secret of that.”

The antelope grinned down at Glorious, her blunt teeth a strange mirror to the wolf’s snarling fangs. “What will you do now, wolf?” she asked. “You can hardly blame me for bringing your little friend back to you, and not even under false pretenses.”

Glorious twitched his shoulder and Summer stepped back, a little frightened. But he was not looking at her. Instead, his cold green eyes bored into the antelope woman’s dark, amused ones.

“What game are you playing?” he asked.

She laughed. “Does it matter what I say? Would you believe it?”

Summer had seen flashes of the wolf’s astonishing speed before, but she had never seen him simply uncoil like this. He moved like a striking snake, leaping for the antelope woman’s throat.

“No!” cried Summer. Even if the antelope woman couldn’t be trusted, she had saved Summer, gotten her away from Zultan, been punished unfairly by the gods of Orcus. She’d been kind, in her own twisty way.

She was never sure afterward if her cry made Glorious lose a fraction of his speed, or if it gave the antelope woman a heartbeat worth of warning. Perhaps it wouldn’t have mattered either way. But Glorious’s teeth snapped on empty air and the antelope woman was gone, gone, bounding away down on the road on her spun-glass ankles, faster than a wolf could run.

She vanished into the scrubby trees. Glorious stood with his feet planted wide and his teeth bared.

“I could follow,” he said aloud, almost to himself. “And she would doubtless lead me into a trap, and that would be the end of a wolf.”

Glorious sighed, and slowly the growl went out of him and his lips dropped back over his teeth.

“Yes,” he said. “Or you were always meant to escape, and now you have led her to the rest of us. No, I don’t blame you! You did the only thing you could do, Summer-cub, and our small winged friends found you and lost you and found you again, so of course they led you to us. They are not complicated enough creatures to put up against an antelope, and you are from another world and could not know.”

“We don’t have them there,” said the weasel, popping up on Summer’s shoulder. He wrapped his paws around Summer’s ear and began furiously grooming her hair.

“They are unique to Orcus, I hope,” said Glorious. “They speak a great many lies, and even their truths mean harm for someone.”

Summer sagged against him. Despite what he had said, she felt that she had failed—escaped wrong, somehow. “I’m sorry,” she said. “I didn’t know how to get away. And Grub was talking about torturing me and Zultan is…is…”

She trailed off. She didn’t know how to explain Zultan.

The two goose-guards appeared behind them on the road. “No one on our backtrail—” began Ankh, and then, “Miss Summer!”

Ounk flew to them and slapped Summer on the back with her wing, hard enough to knock the wind out of her. “You got free of those villains! Well done!”

“There was an antelope woman,” rumbled Glorious.

Both of the Imperial Geese stilled.

And then Ankh astonished Summer by spreading her wings out and curving one around Summer, as if she were a chick. “It is my fault,” she said quietly. “I left you alone with that traitorous priestess. I knew better, but she was polite, and it is easier to fight swords than courtesy sometimes. But you’ve done well, in a situation you should never have been in. You’ve tangled with an antelope woman and walked away, and if there are echoes from this, I will stand the blame.”

Summer felt tears slide down her cheeks, but she was encased in the goose-guard’s wing like a warm blanket. Ankh was a grown-up, in a way Reginald wasn’t, and if Ankh said that she’d done well…

Glorious nodded. When Ankh released her, he pressed his nose briefly against her forehead, and Summer felt better.

“I shouldn’t have left,” whispered the weasel, so that only she could hear. “I knew I shouldn’t, no matter what it smelled like. I’d have bitten her so hard…”

Reginald reappeared and landed next to them, looking disgruntled. “She gave me the bag,” he said. “Into the rushes and no mistake.”

“Probably stopped to tie his cravat,” muttered the weasel.

Reginald ignored him and focused on Summer. “But it doesn’t signify, since you’ve come back! Ho!” He reached up and shook her hand so vigorously that he nearly fell over.

“The antelope will draw them back to us, I suspect,” said Glorious.

“Oh, well. If she squeaks beef, we’ll give them a bellyful!”

Everyone looked at him.

“If she raises the alarm,” translated Ounk.

“We will deal with it,” said Ankh.

“That’s what I said,” grumbled Reginald, and Summer let out a gulping laugh, because she was back and she loved them all and this was so much better than going home.

“Let us get off the road,” said Glorious. “We were moving fast to try and catch up to you, but we should not stay in plain sight now. Sleipnerians run faster than wolves, but they are not good in trees.”

“And we must determine…,” said Ankh.

“…which way we are going,” finished Ounk.

“Oh no…” said Summer, sagging against the goose-guard. She’d almost forgotten, in the horror of the ride over the spider horse and the face of Zultan and the wildness of their escape. “The priestess sold us out—”

“We know,” said Glorious grimly. “She will not do so again.”

Summer had been moving toward him to mount and ride, but stopped, eyes wide.

He snorted. “No, I did not kill her. She made a fool’s bargain and guilt has its teeth in her more deeply than any wolf could bite.”

Summer exhaled. She knew that in church, they said you had to forgive people, but she did not feel terribly forgiving. Still, Cereus had been…well…

Weak, but not evil. She was scared. I wouldn’t trust her again, but she had to live in that horrible rotten cactus room and she didn’t dare tell anyone. That might make anybody do stupid things.

She put one leg over Glorious’s back. The wash of fur over her hands helped drive out the memory of the spider-horse’s bristles against her skin.

If this were really Narnia, I suppose Cereus would come to me in chains and confess and beg my pardon. But I really just don’t want see her or think about her ever again.

“So we didn’t get a wasp,” she said mournfully. “And now we have to go find another wondrous thing.” She did not know if she could handle much more of this—going from glory to glory, looking for the one that was dying, while dodging Zultan and Grub.

“Now, now!” said Reginald. “We’re not so far aground as you think! The little feathered chaps took care of us on that score, you may be sure.”

Summer blinked at him, not sure what he was saying.

Reginald clapped his wings together and the valet-flock landed, twittering. Two dove into the pack and came out again.

They were carrying a bottle. It looked almost like a perfume bottle, made of tinted glass…and it was buzzing.

“M’very best feather oil, too,” said Reginald sadly. “Dumped it out all over the vicious little blighter, and then crammed it into the bottle while the rest of us stood around gawping.”

“Speak for yourself,” said Glorious, amused. “A deer I might bring down, but a wasp is better prey for smaller claws. They did a fine job, though, and I thank them for it.” He nodded his head to the valet-birds. One took off its bowler and bowed to the wolf.

“You mean they caught a wasp?” said Summer.

“Oh, aye. Any time you wish, we’ll tie a string to the nasty little thing and follow it clear to the back of beyond.”

“Then we did it,” said Summer. She felt slack with relief and had to grab for Glorious’s fur as the wolf broke into a trot. “We did it. We can find the Queen-in- Chains.” 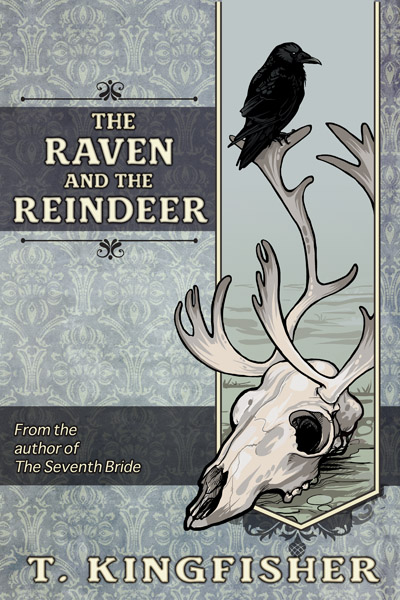